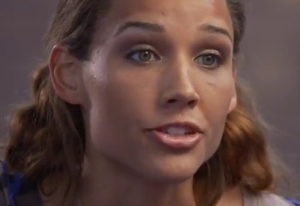 In this interview with HBO Sports, Lolo Jones makes clear some of the circumstances that led her to be a 30 year old virgin. Let’s analyze what the video is telling us:

-First, the obvious: her appearance. She is both attractive and well defined. She has attractive teeth, eyes, and cheekbones that guys love to love. These tell us that she is probably well set in the amount of natal estrogen, creating a potential situation for an ingenue. She glimpses skyward when thinking, and gazes solidly at the interviewer with a wide-eyed naivety. At the same time, she also has a manjaw, which throws a wrench into the mix. The manjaw hints at, well, being a man. Probably due to the amount of testosterone she has either injected or harnessed through constant competition. I happen to know a girl who has the same wide eyed naivety yet testosterone driven cunning, and she looks and acts exactly like LoLo. Typical to the ingenue form, she is brutally honest and innocent, with a ridiculous naivety to girl-game. She also has a type of masculine charisma in her ability to spin off jokes and inspire likability. She does not have any of the sexual hangups, though, seeming to bounce from one hookup to another. The strange dynamic is one that Heartiste points out: either a girl is a sanct ingenue, or the sluttiest of the sluts. She seems so submissive to the will of other people (including guys looking for a hookup), it rubs off as virginal cleanliness and you can never be sure which without hard proof.

-Her father and mother lived for twenty years without marrying and eventually separated. This screams uber-alpha. Add the good looks and it is a strong case that she is bred of high stock. As a daughter, she probably spent all her life trying to capture the attention of her alpha dad, who by nature would be eternally whimsical and imbued with wanderlust.

-She considers her virginity a gift (!) that she wants to give to her husband. She thinks its the hardest thing she has ever done in her life- harder than college or training for the Olympics. She also realizes and acknowledges the past temptation and opportunities that she could have had sex.

-The feminist manjaw cunt interviewing her seems to be laughing at Lolo as she jokes about being the next Steve Carell in 40 Year Old Virgin. Lolo powers right through it, seeming more and more resigned, submissive, and desperate. How often do men see a girl so hopelessly resigned with desperation to get laid? Its a paradox that makes the interviewer laugh hysterically. The feminist news media naturally would want to reframe the desperation as laughable and shameful, whereas a man’s gut instinct is to white knight and fuck her brains out.

– She describes a common scenario when guys find out. They say ‘its cool I respect that,’ meanwhile thinking about how she is lying and they are going to ‘crack that.’ After 3 months, it clicks in the guy’s head and he leaves for other girls. I’m not sure if she is aware, but guys have to sexually escalate and girls naturally have to rebuff. A guy knows he is doing a good job when the girl becomes conflicted with emotion, claims “she doesn’t normally do this” and eventually gives in. Jones seems to have never experienced this submission to emotion and masculine power- most likely because she is full of testosterone and analytical mental calm. The question becomes, what then could she offer her husband? If she cannot submit to him, and probably spends all her time training at the will of some male trainer, when is she going to give herself over?

The ingenue seems to be granted with abnormally high levels of feminity and masculinity at the same time. On one hand, her feminity leads her to look beautiful, act girly, and be submissive. On the other hand, her masculinity leads her to be overly logical, mentally calm, and dominant and competitive. Men approach the ingenue, so she is never nervous and out of her comfort zone. Men try any manner of extracting sex or interest, and she most likely plays cool and aloof. She is doomed to only ever see it as a logical act, and never a spiritual or whimsical act. Therefore her feminine side wages war with her logical side, and she becomes desperate for that letting go. Look no further for the type of girl who uses hardcore drugs, or engages in a marathon session of hookups. The lust for life drives her.

Her counterpart is the Casanova. Typically a ruddy and manly alpha type driven by passion or ideal, he has seen it all by a young age. He seems older and more experienced and wiser than most, ingrained with wanderlust and emotion. He most likely despises his tendency to dominate other men, leading him to deny the nature of humanity. Since he will never escape this human condition, he is only sure of one real phenomenon: the power to attract women. Indulgence leads to male slutiness and waging war with everyone who cannot understand his fight. Self-control leads to belief in morality and virtue and a lust for the spiritual.

This entry was posted in Uncategorized and tagged Feminism, Girl Game. Bookmark the permalink.